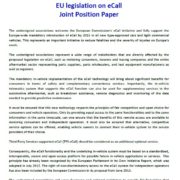 The undersigned associations welcome the European Commission’s eCall initiative and fully support the Europe-wide mandatory introduction of eCall by 2015 in all new type-approved cars and light commercial vehicles. This represents an important initiative to reduce fatalities and the severity of injuries on Europe’s roads.

The undersigned associations represent a wide range of stakeholders that are directly affected by the proposed legislation on eCall, such as motoring consumers, insurers and leasing companies and the entire aftermarket sector representing parts suppliers, parts wholesalers, and test equipment manufacturers as well as repairers.

The mandatory in-vehicle implementation of the eCall technology will bring about significant benefits for consumers in terms of safety and complementary convenience services. Importantly, the in-vehicle telematics system that supports the eCall function can also be used for supplementary services in the automotive aftermarket, such as breakdown assistance, remote diagnostics and monitoring of the data needed to provide predictive maintenance.

It must be ensured that this new technology respects the principles of fair competition and open choice for consumers and vehicle operators. Only by providing equal access to the same functionalities and to the same information in the same timescale, can one ensure that the benefits of this remote access are available to motoring consumers and independent operators. It must also be ensured that alternative, competitive service options can be offered, enabling vehicle owners to connect their in-vehicle system to the service providers of their choice.

Consequently, the eCall functionality and the underlying in-vehicle system must be based on a standardised, interoperable, secure and open-access platform for possible future in-vehicle applications or services.  This principle has already been recognised by the European Parliament in its Own Initiative Report, which was adopted in July 2012. The right of non-discriminatory access to the eCall system for independent operators has also been included by the European Commission in its proposal from June 2013.

The undersigned associations call upon European and national legislators to provide EU Regulation that maintains equal opportunities and a level playing field by mandating an interoperable, secure, standardised and open-access platform for eCall and by proposing concrete provisions on how to implement this. This would ensure the right of equal access to equal information and the freedom of choice of competitive consumer products and services.

Telematics and the Automotive Aftermarket
Scroll to top